The Beach Club at Sherrod Elementary in Arlington, Texas had the high honor of hosting Arlington Police Chief Will Johnson as the guest storyteller earlier this month. He inspired both children and volunteers with the powerful message he shared. 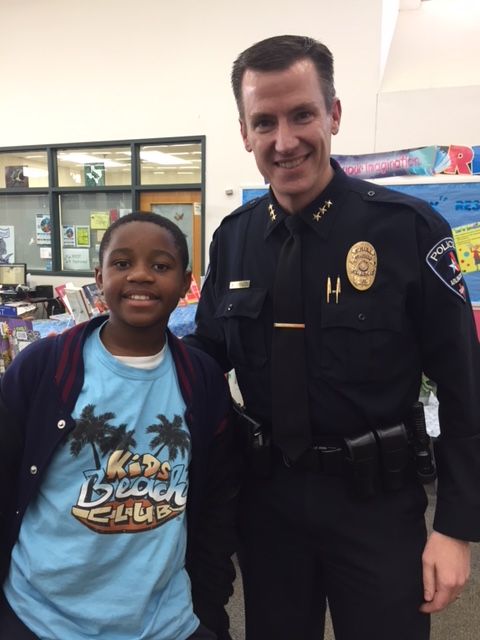 Club leader Susan Jiura enjoys inviting guest speakers who attend Pantego Bible Church, which partners with KiDs Beach Club® to sponsor the club, and various community leaders throughout the school year. She heard Chief Johnson speak a couple times before she was brave enough to invite him to speak at Beach Club.

Lt. Scott Brown of the Arlington Police Department already comes to speak at the Sherrod Beach Club as a special guest once a year. Chief Johnson had already been keeping up with the Sherrod Elementary Beach Club through Lt. Brown’s visits and updates. Chief Johnson was honored to be asked to come, and gladly accepted the invitation.

“Chief Johnson shared with our kids that he made many mistakes in his younger years, and he is thankful for people who cared about him, forgave him and helped him grow,” Jiura said in summary of Chief Johnson’s remarks. “He went on to say that the Bible teaches us about how God forgives us. As believers we are supposed to act like Jesus and forgive others.”

Based on Chief Johnson’s message, the volunteers were able to discuss the importance of prayer in life. Chief Johnson shared with the kids that they can pray to God any time. He likes praying while he jogs. He also gave a few examples of the things he prays about and thanks God for, like his family and being a police officer in Arlington.

"We represent light in the world as God's family. We are leaders. Others are watching us," Chief Johnson said.

The kids, at first, were surprised and nervous to see a police officer visiting Beach Club. In the end they really enjoyed his talk. One fourth grade boy requested to have his picture taken with Chief Johnson. Jiura shared how many children don’t have a positive view of police officers these days. She hopes to help change that.

Even though Chief Johnson oversees a department of 649 officers, 195 professional staff and 12 reserve officers, he finds time to speak to kids in the community and share the love of Jesus to the kids at Beach Club.