Giovanna Carrington agreed to volunteer for Beach Club at Woolmarket Elementary in Biloxi, Miss. this year. Although she did not attend Woolmarket Baptist Church, which partners with KiDs Beach Club® to sponsor the club, she was excited to fill the need the club had for surf team leaders.

By becoming a Beach Club volunteer, she has found out just what her calling is and that is sharing the gospel and loving children like Jesus does.

“God has used her to lead her entire surf team to Him,” said Missy Holaday, the KBC independent club relations specialist for Southern Mississippi. Holaday has had the great joy of watching Carrington share the gospel during Beach Club.

“What is so special about Carrington is the fact that she has now led 14 children to make a profession of faith while they were in her surf team,” Holaday said. 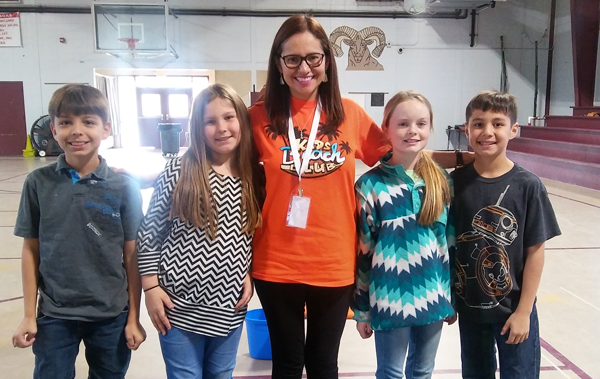 “Carrington fervently prays for the children in Beach Club, and specifically those in her surf team. She prays that they will know Jesus and accept Him.”

Earlier this school year, Carrington had a surf team of eight children. She shared the gospel with them in surf team time early on. She would ask them, “Do you love Jesus? Do you want Him in your heart? To be your best friend?”

The children responded to this invitation one or two at a time each week and would remind Carrington that it was their turn to accept Him. All the kids in her group responded except one.

This child did not desire to accept Jesus like the others in her group. But each week he would ask more questions and participate more. One morning, on the same day of Beach Club, Carrington heard the Lord tell her today would be the day for this child to accept Him and she should be ready. At Beach Club that day the boy made a profession of faith and Carrington was able to lead him through the ABCs and pray with him.

After each child in Carrington’s original surf team accepted Jesus, the club leader decided to rearrange surf teams to fix some behavioral issues. Although many were worried about children losing the connections and relationships with their surf team leaders, this change was used for good. Once the surf teams were rearranged, Carrington’s surf team had six new children, and they all, too, made professions of faith before the club finished meeting this year.

“God is amazing and so wonderful,” Carrington said. “These kids’ personalities are formed. They know how to memorize verses in the Bible and they know what they are saying. I want to make sure it is coming from their heart because they love Jesus. They have to put forth the desire.”

“It is the best thing that’s happened to me,” Carrington said. “Everything was turning around in my life, to have time to teach and to be at Beach Club. God told me to do this and I am going to do it.”