Lowry and Diane Mayo are surf team leaders at the Beach Club at Bukhair Elementary in Dallas, Texas. One evening after Beach Club, the Mayos went into Corner Bakery to eat, still wearing their Beach Club t-shirts. While there, a woman came to their table and briefly spoke with them about KiDs Beach Club®. The woman also gave them a $20 donation. 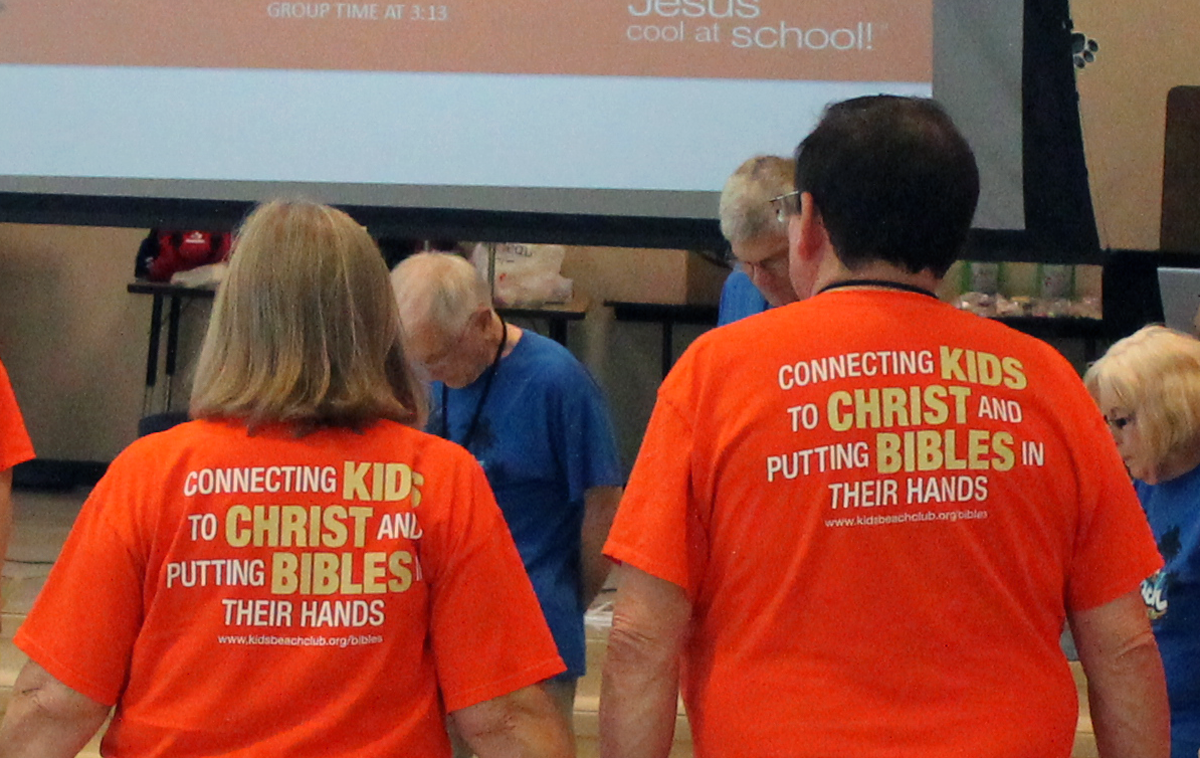 “She said that she liked what we do with children and wanted to help out,” Lowry said. “She handed us the $20 and asked us to give it to the people in charge.”

The Mayos did not know the woman, nor had they had any previous interaction with her. The couple believes that the woman noticed their Beach Club shirts, the back of which includes the text, “Connecting kids to Christ and putting Bibles in their hands.”

After the encounter, the Mayos passed the donation along to Keith Joyner, their club leader from The Heights Church in Richardson, which partners with KiDs Beach Club® to sponsor the club at Bukhair. Joyner submitted the donation through the KBC online donation page with a note that read: “Given by a patron in a local restaurant who saw one of our Beach Club leader couples wearing their KBC t-shirts, asked about Beach Club and felt led to donate to support KBC.”

“Many times, people have commented on our shirts and thanked us,” Lowry said.

This experience is not unique to the Mayos. Ann Griffith, a KBC club relations specialist, was at Sonic when the carhop noticed the box of bright orange KBC t-shirts sitting in Griffith’s car.

According to Griffith, the carhop said, “I love that organization. My kid went through it and just loved it.”

For Beach Club volunteers, it is easy to think of the t-shirts as just the uniform worn to Beach Club so that everyone will match and to help the kids easily identify the leaders. However, it is important to realize that they are also a powerful tool for sharing the ministry.

“There are a lot of believers out there that see it and don’t know what it is,” Griffith says.

Wearing a KBC t-shirt can change that immediately. With the recognizable KBC logo on the front and the explanation of what we do on the back, these shirts quickly introduce anyone who sees it to KiDs Beach Club®. So, wear it proudly – and not just on club days.

Many clubs already provide their volunteers with t-shirts; however, if yours does not, be sure to tell your club leader about this valuable tool. If you are not a volunteer, you can still sport the KBC colors and spread the word. T-shirts (and a nicer, black polo shirt with the KBC logo) are available in the KBC Surf Shop at kidsbeachclub.org/surf-shop.