The adjectives describing Great Treasure Day at the Beach Clubs all around America sound strikingly familiar; awesome, incredible, amazing!  Those words are just a reflection of the joy that nearly 2,200 KiDs Beach Club® volunteers experienced when they handed out a copy of God’s Word to every child in every one of the 146 Beach Clubs.  “It’s just an amazing privilege to give every one of these students their very own Bible,” said Paul McKinney, Senior Pastor of First Baptist Church in Eustace, Texas. 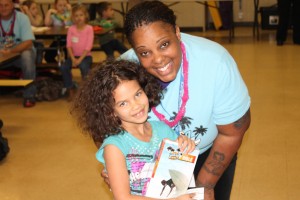 As McKinney and 30 volunteers handed Bibles to each of the 112 children, numerous parents worked their way to the front to snap photos before a large applauding crowd that included the Assistant Superintendent, five school board members, principals from all four of the district’s campuses as well as several teachers from each of the schools.  “In our core values KiDs Beach Club® seeks to make Christ relevant by Impacting Communities for the Kingdom,” said Jack Terrell, President and Founder of KiDs Beach Club®  “The amazing out pouring of Eustace city officials as well as district personnel at the Eustace Great Treasure Day validates our ability to bridge the void between church and community. Everyone who attended that day was “impacted” by Christ. The overwhelming affirmation of the day reveals the underlining tenant that KBC needs to be there.”

McKinney’s church is in its first year of sponsoring the Beach Club at Eustace Intermediate School and he is elated with how the kids in his club have not only started to recognize the power of God’s Word in their own lives but are now wanting their friends to have the same experience.  Not only have these kids brought their friends with them to Beach Club but they are also bringing them to the weekly AWANA program at FBC-Eustace, which focuses on memorizing scripture. “It’s amazing because we haven’t really promoted our AWANA program but we have had several kids from Beach Club come to our AWANA,” McKinney said.  “The more we can get them engrained in the Bible, they’re going to tell their friends and bring their friends.  There’s no telling where the Lord can take this.”

Many seeds planted at Beach Clubs over the years have already seen the fruit of children sharing the gospel at home with their siblings and parents and some of those conversations have resulted in professions of faith.  That hasn’t happened yet in Eustace during the first year of the Beach Club but Pastor McKinney can’t wait for that day.  “That would be amazing,” said McKinney. “There’s one place in scripture where it says Jesus was full of joy and that’s when the 72 came back and reported what they had done and He was full of joy because He had made disciples.  For a pastor, what greater joy is there than to see that you were used by God to make disciples that can reproduce themselves.”