Thank you to those who gave a gift last week on North Texas Giving Day. Friends of KiDs Beach Club® were able to help us surpass our goal of $25,000 and gifts continued to come in to us this week by mail or through our website.

A record total of 116 gifts were made to KiDs Beach Club® through the North Texas Giving Day website and those totaled $14,444. Eight donors made contributions directly to KBC through the website or mail totaling another $1,546. Another donor provided a gift of $10,000 of which half was earmarked for matching funds essentially doubling the impact of our first $5,000 in donations last Thursday. The total given to KBC as a result of North Texas Giving Day is $25,990. 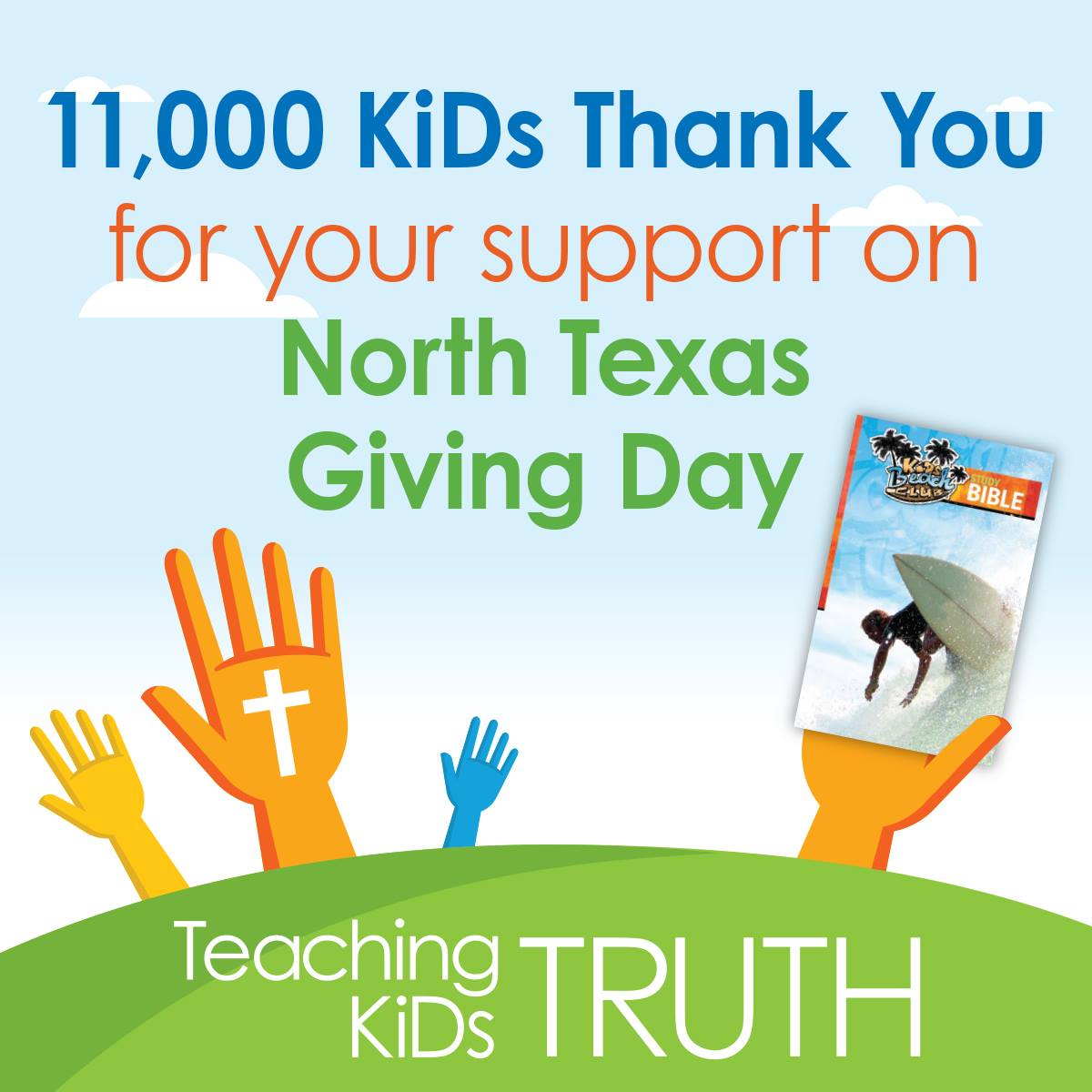 One thing that stands out is that KiDs Beach Club® is reaching an even wider audience than ever before. There were 45 donors on the list who gave to KiDs Beach Club® for the first time, including several listeners of the Chris Krok Show on WBAP Radio, who essentially used his four-hour show on North Texas Giving Day as a radio-thon to raise money for KiDs Beach Club®. Those first-time donors helped raise more than $3,000.

One KBC family gave $2,750, which is the price it costs for a church to sponsor a Beach Club. Two other donors each gave $1,000 and another six donors contributed at least $500. Nearly all of the remaining gifts were $100 or less.

All donations will help KiDs Beach Club® provide ministerial assistance for churches or be used to purchase Explorer’s Study Bibles for kids in our clubs who have not yet received one. It only costs $20 to put a Bible in the hand of a child. If you were unable to give and would still like to, you can do so here.

You likely saw our aggressive social media campaign that reached a total of 45,121 people on Facebook. Our tweets on North Texas Giving Day were liked or retweeted 149 times and our Instagram account engaged with nearly 300 people. All three of our social media accounts added several followers last week. If you’re not already following us on social media, we would love to welcome you to those communities. If you do follow us on social media, invite your friends and colleagues to follow us as well.